The perils of political fact and fiction: it's all gone bonkers update

That was the quite classic Facebook reaction of one friend in the early hours of June 24th, and the only one which gave me cause to smile. Indeed, I concurred with his shock, but I won't go into the whys and wherefores here. I'll stick to the topic in hand: fact v fiction, and why too much inspiration can be quite the headache. 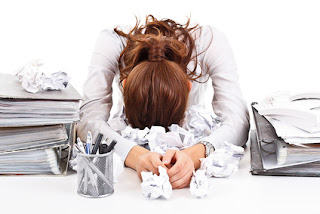 Quite often, when writing political fiction, events can overtake when you’re busy tapping away on the laptop keys, mind buzzing with story lines which would surely be far too crazy to happen in real life. Until now I’ve found that, although this has been the case on more than one occasion, I’ve been able to shrug it off, joke about a disclaimer or two when actual events mirror my writing. But, for the past week or so, I think real life has surpassed itself. 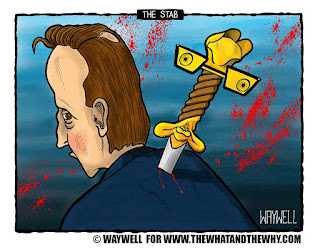 Gove is looking quite the Colin Scott - would he seek to usurp a leader in a coma? Very possibly...

If anyone has actually read the blurbs for my two books, Party Games and Power Play (I hope one or two of you have!), you’ll discover they’re all about personal and political animosities, rivalry, love, a huge dose of backstabbing and naked ambition. When I first started writing them, years ago, I thought a leader being shot by an old colleague with a grudge then left in a coma, plunging his party into the grip of his narcissistic rival as the Right surged ahead, would be probably too far-fetched. Cornish devolution and the threat of EU withdrawal were ridiculous policies I could have my antagonist promise with my tongue firmly in my cheek, safe in the knowledge I was literally just making it up. A party stuck with a leader it hated, voted in on a popular grassroots vote, would surely be anathema, pure fantasy, so I could just about get away with it by saying to those who might argue that politicians don’t talk/act/plot like that, that anything goes in fiction writing. Keep your hair on, it’s made up, mate! But, oh dear God, I fear my own writing is tame in comparison. 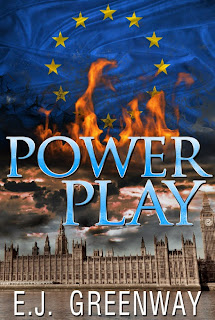 My latest book, Power Play, is available from Amazon here

Until now, Australian politics has been the one to watch. The animosity of the Rudd/Gillard years and Labor’s infighting in their wonderfully titled ‘party room’ gave me food for thought. But never mind Gove promising their points system. He has already carried out what was until recently a trademark of Aussie backstabbing in Canberra – political regicide. 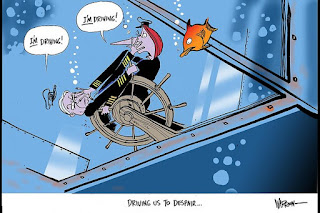 The Rudd/Gillard civil war, now tame in the face of current UK politics

Hang on, I thought two days ago, only the baddies in my novels would turn on a supposed friend, those of low morals who would do anything – and I mean anything – for the crown. I am two thirds of the way through my final book, End Game, and although I have an ending I want to stick to, it’s very tempting to move away from it and write something so outrageous it couldn’t possibly happen. True, I’ve actually got literal as well as political casualties as the Tory Party falls apart under the ‘Fuhrer’s’ leadership as the resistance gathers pace, but I feel as though my writing is getting swept along on a tide of crazy.


So, although I love a good bit of plotting, for the sake of my creative zen, please can things just calm down a bit so I can get End Game finished? All this insanity is incredibly distracting!
Posted by Unknown at 09:03