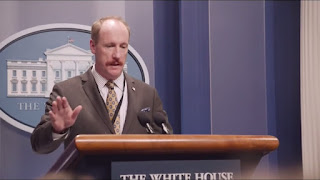 Hanging on in there: Veep Press Secretary Mike McLintock

Throw in Donald Trump, like the political bomb he is, under all of  the above in one real-life fly-on-the-wall documentary, and you probably have a realistic idea of what current American politics is all about. I am, of course, talking about satires VEEP and THE BRINK, and the serious West Wing wannabe MADAM SECRETARY. 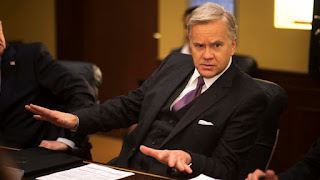 The Brink's Secretary of State Walter Larson: Because he's definitely worth it

After a while all three begin to blur as you spend your time remembering which minor character is in which show ("I'm sure I've seen him in both The Brink and Madam Secretary, or was he in Veep and The Brink or Madam Secretary and Veep??"), but with The Brink and Veep having such strong writers it doesn't really matter. Exaggerations they may be, but throw in a heavy dose of Mad Sec (not sure about this abbreviation but hey!) and it's likely you've nailed the American political scene. Those taking a sadistic interest in Australian politics may agree there should be an Australian version - if you think the US is cut-throat then I'd kill (a traitor) to see Kevin Rudd and Julia Gillard lampooned in fictional Veep-style mockumentary The Party Room... 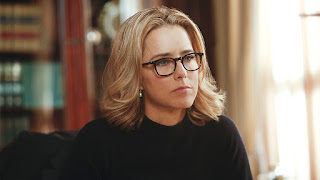 The sharpest - and shiniest - specs on TV: Elizabeth McCord IS Madam Secretary

Both Mad Sec and The Brink have sometimes pugnacious, other times inept and plain stupid Presidents, but while in The Brink this is meant to be heavily tongue-in-cheek to give our hero Walter Larson more leverage in the climatic final episode, I can't help but wonder in Mad Sec if it is purposeful or not. 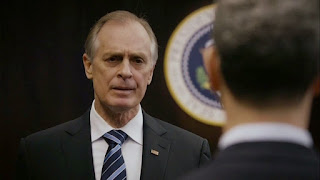 Still, I have a huge affection for it because of Téa Leoni, who does a great job in the title role against a slightly lame supporting cast and an often dodgy script. She is Madam Secretary, both in character and the whole show, and although her methods aren't the unconventional approach to negotiation as Larson's, they seek similar outcomes, and surely it's the resolution that matters most? Larson's appetite for women (any women, it seems, but in the end his wife in full view of the Israeli PM, ahh...), Selina Meyer's insecurities and Elizabeth McCord's trauma after a terrorist attack give them a realistic edge. All three series show that as America builds to 2016's presidential race politics can be just as enticing in fiction as zombies, alien invasions and epidemics. 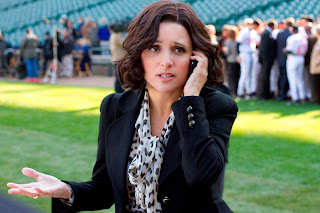 But Tim Robbin's Secretary of State against Téa Leoni's in a war of words, or an actual war? And what if Meyer was running the world (into the ground) in the middle of it all? If I had the time I might go back to my fan fiction days and write a mash-up, but for now I'm hoping in their respective season twos they, like Meyer, end up with the top jobs. If Veep didn't need to change its name, why should Mad Sec? And a President Larson who would make JFK look almost monk-like? Oh, yes, yes, YES, Mr President!
Posted by Unknown at 09:34