After a lengthy adoption process, including a home visit and a mountain of paperwork, we finally were able to collect her. Izzy is now eight months old and adorably sweet, but she can sometimes sleep so much in the day she’s a bit grizzly at night and demands attention, but it’s ok as we’re totally besotted and it’s all been worth it. I am, of course, talking about our kitten, a lovely tabby who adores people and is slightly terrified of the outside world. This includes birds, grass, plant pots and any other perils in the garden. 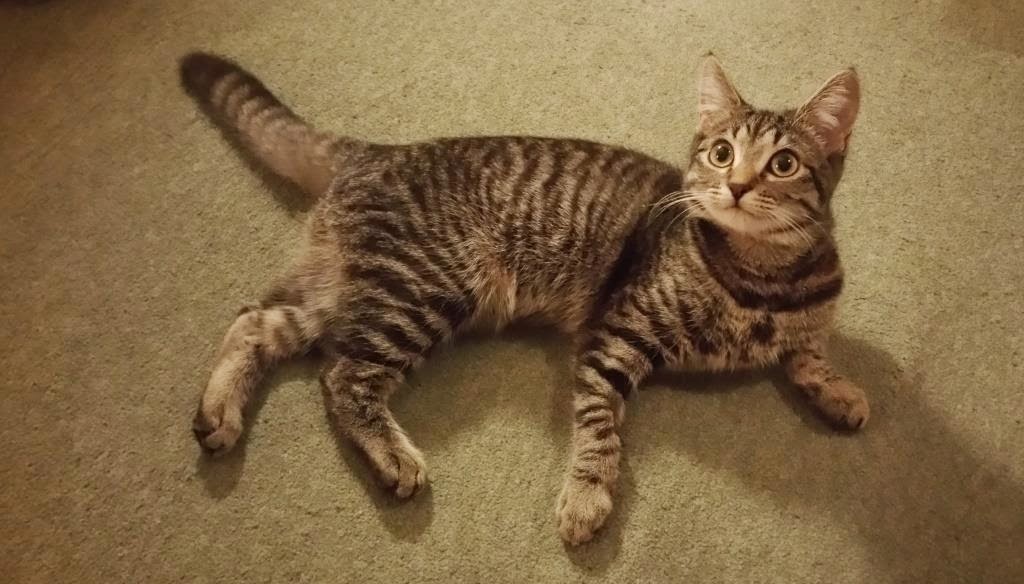 We adopted her through a nearby rescue charity called Happy Cats, run by a dedicated lady called Jo who, while having eight cats of her own, takes in any cat no matter what their history and helps find them suitable ‘forever homes’. It doesn’t end when you take the cat home, Happy Cats provides support throughout the cat’s life and no cat is adopted out until it has been spayed/neutered and wormed.

Izzy came to us after the cat she had been living with kept attacking her, injuring her eye, so her wariness of other animals is to be expected, although our guinea pigs Sooty and Sweep (recently adopted through St Francis Animal Rescue in Eastleigh) are a source of endless fascination.  She loves to play and find mischief, as kittens do, and has such a sweet nature despite her shaky start.

Since becoming a cat owner (or is it ‘adopter’?) I’ve suddenly taken to watching Animal Planet and programmes such as fantasically named cat behaviourist Jackson Galaxy in the utterly American ‘My Cat From Hell’. He helps people with severe cat problems (a bit like Supernanny but with tattoos and a beard), including one idiot who fed his cat junk food, instilled no discipline at all and wondered why his cat was a feral nightmare! He is great and so patient with his clients (by which I mean the people, the cats are never the whole problem!). Anyone with a cat should give him a watch!

Izzy is now firmly a member of our family. As I type I can hear her bell jingling as she finds yet more gaps to squeeze into and more surfaces to jump on. She’s now meowing and crinkling something she shouldn’t be dragging around the kitchen. *sigh*. Best signed off with a ‘thank you’ to Happy Cats, without whom we may never have found her.
Posted by Unknown at 10:42